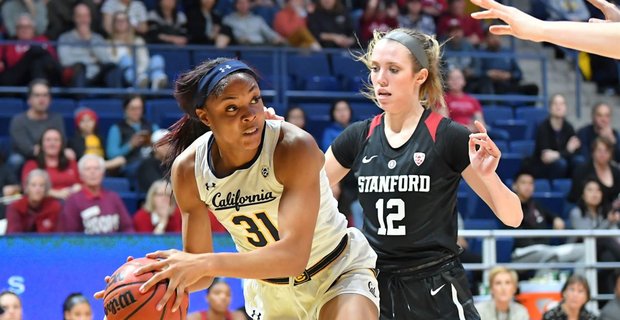 Asha Thomas isn’t one to shy away from a big play with a whole lot on the line. So, when the Cal women’s basketball team needed someone to come up clutch against Stanford, she was ready.

With time about to expire, Thomas drove to the basket, drawing hard contact along the way. Her high-arching lay-up hit the rim once. Twice. Three times — and then it rolled in. The buzzer sounded. Game over.

It was Thomas’ lone field goal of the day, and it was what gave the Bears the 81-80 upset win over their biggest rivals.

“I like big moments,” Thomas said. “I have the chance to make a play for myself, whether it’s for others, yeah, I want the ball in my hands.”

Cal head coach Lindsay Gottlieb said she “just felt so confident to put the ball in (Thomas’) hands and say you’re going to have to make a play, I couldn’t script it better.”

Gottlieb added of Thomas: “She inspires me. I think every single practice she comes with the same attitude, picking everybody up, and now this is where she shines. She deserves that. She deserves all that because she does everything for everybody else.’

The Bears’ best player, Kristine Anigwe, watched Thomas’ shot from the bench after Anigwe fouled out with 7.2 seconds left in the game. While she said it was tough not to be on the floor as the clock wound down, she knew Thomas would be able to do something to give Cal the victory.

“The ball’s in Teezy’s hand, and she makes an unreal, incredible play,” Anigwe said. “That’s just something we expect from her. It’s something that’s unreal to you guys, but, to us, that’s Teezy. I’ve seen her grow, and it’s really incredible that she hits big shots and that she stays so humble. And the next game she’s going to come out with even more fire.”

Anigwe finished with 25 points and 24 rebounds — it was her 21st-straight double-double and was her best career outing against Stanford. Behind her on the stat sheet were Jaelyn Brown, who had 18 points, and Kianna Smith, who had 16. Reece Caldwell added 11.

Thursday night’s game was quite the back-and-forth affair — there were 18 lead changes and 13 ties, and neither team ever led by more than six points. In just the final 30 seconds, the lead changed four times. With 29 seconds left, Stanford took a 78-77 lead that the Bears grabbed back when Thomas got to the line (after a loose-ball scramble) and made both of her free-throw shots, her only other two points of the game. The Bears led, 79-78. Then the Cardinal went to the line after Anigwe fouled out and took back its lead. 80-79.

When Gottlieb joined Thomas and Anigwe in the post-game press conference, the head coach said she was “kind of speechless here sitting with these two.”

“What can you say?” Gottlieb asked. “We come to the office every day, and there’s so many reasons you do it, but days like today are the ones that you just never forget. It goes without saying that any win against Stanford feels extra special because of how good they are. How well prepared they are. Their everything. Their consistency, their playmakers. So it makes everything more meaningful.”

Stanford head coach Tara VanDerveer called the game the best basketball game of the night, saying fans who were at the Warriors game missed out.

“I’m really proud of our team, how we battled,” VanDerveer said. “Came down to one play … and we just didn’t get a stop when we needed to down the stretch.”

Cal’s win means it’s the first time the Bears have beaten the Cardinal in back-to-back games since 1986.

The Bears and Cardinal will face off again on Saturday, but this time the game will be at Maples Pavilion.

“This gives us a chance to get a sweep,” Gottlieb said. “And that’s what we’ve talked about. Let’s win this one so we have a chance to do something a Cal team hasn’t done since they made this twice in one week. So we’re going to head down to the Farm with an opportunity to do something great.”

happiest among flowers
the size of my smile is directly proportional to how much of my drink i’ve had
clear skies, full hearts, can’t lose
writers will do anything but write
out of office ✌🏻
stress baking over a tennis match? couldn’t be me! (vamos!)
kinda unfair how much better everything looks on film
favorite reads of 2021
where i want to be: here
have spent more time in LA in the past month than i have in basically my entire life
%d bloggers like this: